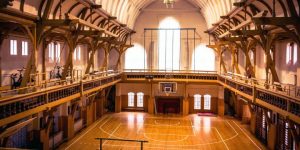 The convention will be held in the big gym “pod Hradnem”, one of the most beautiful historical gyms in the Czech republic. Apart from the gym itself, amenities such as locker rooms and showers will be available.

The building itself was built by Brünner Turnverein (german physical education organisation in Brno). The Moravian-german architect Augost Prokop was asked to design the building in 1867, after he returned to Brno after several years spent in northern Europe. He decided to build the space in a northern neo-gothic style. Unplastered bricks, distinctive pillars, arches and gables on the floorplan of the triple nave temple gives almost a sacral dimension to this building. The wooden construction of the ceiling is the most notable part of the building. All those aspects are understandable regarding the task the Brünner Turnverein played. Its role was similar as the role of the Sokol unity in the Czech community. The building represented national values and ideals, till the German house was built it also served as a culture centre, concert hall and theatre for the german nation in the Brno.